For Daniel J. Rodriguez of RRBH Law, helping people in the community is the most fulfilling part of being an attorney. “As any property owner who has endured an insurance claim denial knows, when disaster strikes and leaves you with thousands or even tens of thousands in repair costs, it can be devastating to find that the protection you thought you had doesn’t exist,” he says. “Since insurance companies are more concerned about profit than they are about giving their policyholders a fair shake, many people get less than what they are entitled to in order to fix their homes.” After Hurricane Irma in 2017, he took on a client whose home was damaged from the storm. “After realizing that the insurance company was not going to give them a fair settlement to fix the damage, they decided to litigate,” he says. “Almost two years after the storm damage, when the insurance company did not make reasonable efforts to settle the true value of damages, we forced them to appraisal only and ultimately received an award over $325,000. This case demonstrates how critical it is for homeowners and business owners to consider litigation when they are not being treated fairly by their insurance providers.” When not dealing with legal matters, Rodriguez loves to play basketball — a sport he played up to the college level before going into law. He credits the experience gained executing strategy and making split-second decisions on the court with his focus in the courtroom today; RRBHLaw.com. 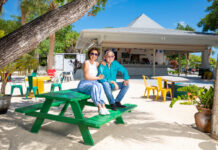